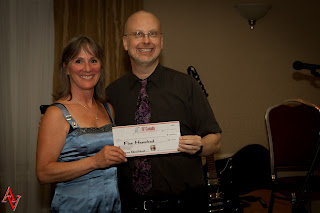 At the 32nd Canvention in Calgary on August 11, 2012 at the When Words Collide festival, Robert J. Sawyer was awarded his third consecutive Aurora Award for Best Novel in English for Wonder (Penguin), accompanied by the SF Canada Award of $500. For over 30 years, Canadian fans of speculative fiction have been voting on the Aurora and Boréal awards to acknowledge the best of Canadian professional and fan activity in both official languages. Susan Forest, vice-president of SF Canada, presents a ceremonial cheque to Robert J. Sawyer. (photo courtesy of When Words Collide)