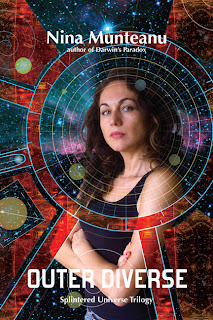 Outer Diverse is the first book of the Splintered Universe Trilogy, set in and around the Milky Way Galaxy. The story begins in the first book as Galactic Guardian Rhea Hawke intestigates the massacre of an entire religious sect. Her investigation leads her into a treacherous storm of politics, conspiracy and self-discovery. Her quest for justice leads her into the heart of a universal struggle and toward an unbearble truth she's hidden from herself since she murdered an innocent man.

"a master of metaphor, Munteanu turns an adventure story into a wonderland of alien rabbit holes... a fascinating and enthralling read."--Craig Bowlsby, author of Commander's Log

"a rollicking science fiction plot with all the trappings...Hawke is a maverick in the wild west tradition...a genetic mystery with lethal powers."--Lynda Williams, author of Okal Rel series

Outer Diverse is now available at Amazon, Barnes & Noble, Borders and other great bookstores near you.
Posted by Nina Munteanu at 4:45 p.m. No comments: