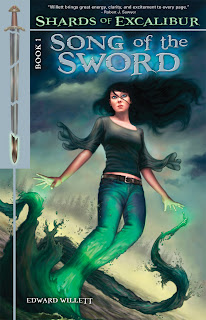 Here's the cover art for Edward Willett's upcoming fantasy Song of the Sword, first book in the five-book series The Shards of Excalibur. The book is due out in mid-October from Lobster Press. Here's the description:

Before the Lady called her, Ariane's life was a mess. Two years ago, her mother disappeared. She bounced around different foster homes until her aunt finally took her in. The meanest clique at her new high school has decided to make Ariane their prime target. And to top it all off, she is having frightening premonitions, and they are becoming more intense. The moment water touches her skin, she sees visions of a lake, a lady, and a sword. When a staircase opens up in the middle of Wascana Lake and the water begins singing to her, she has no choice but to answer the call.Ariane learns that she descends from the Lady of the Lake, and soon the stories she thought were legend become a real life nightmare. She and her unexpected companion, Wally Knight, are charged with finding the scattered shards of Excalibur before Merlin can get his hands on them. The infamous magician, known in this world as software tycoon Rex Major, is trying to recover the pieces of Arthur's sword so he can reforge it and restore his limitless power. Suddenly, Ariane's life seems to have a purpose and a clear direction – but how can a troubled teen and her brainy sidekick outwit the ancient, ruthless sorcerer?