The novel is a reincarnation, time-travel story about young Vancouver-based Max, who finds himself a reluctant investigator into a murder that happened decades ago to David Dexter. Max’s dreams and findings lead him to people it would appear he knew in a previous life and in the end transport back in time and body into the dangerous psychic experiments during the US/Soviet Union Cold War.

Simon Rose joins Five Rivers’ conclave of authors with six children’s novels in print through Tradewind Books, an impressive list of award nominations, and literary award adjudications (the Governor General and Sunburst among them.) A Derbyshire native, Simon now makes his home in Calgary, Alberta. More information about Simon can be found through his website.

Flashback, Simon’s first young adult novel, is slated for release early in 2011.
Posted by Stephens at 8:30 a.m. No comments:

"Waterfront" was directed by Carol McBride in 1986. Originally short in 35 mm, it stars Eva Mackey and features a gorgeous reading (and adaptation) of my short story "Memory Lapse at the Waterfront." "Memory Lapse" first appeared in New Bodies, An Anthology of Science Fiction, published by Emanation Press. (Toronto, 1981). It was rerprinted in my 2008 anthology, "After the Fires," published by Toronto's Tightrope books. Posted with permission.
Posted by Anonymous at 4:08 p.m. No comments:

Edward Willett has sold The Singing Water, the first book in a planned five-book young adult fantasy series (collectively called Excalibur Reforged) set in modern-day Canada, but with Arthurian elements, to Lobster Press in Montreal.
The Singing Water, in which a teenage girl in Regina discovers she's the direct descendant of The Lady of the Lake and must take on a quest to find the first of the scattered shards of the sword Excalibur, will be out in fall of 2010.
Posted by Edward Willett at 9:29 a.m. 1 comment: 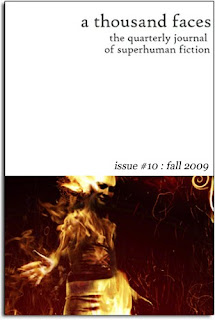 
You can read my Hallowe'en/Fairy Tale/Humour/Urban Fantasy/Superhero/YA story in the fabulous zine of Superhuman fiction, 1000 Faces online now!

In "Camellia Chameleon", a suburban kid suddenly discovers she can change parts of herself at will-- and decides she doesn't like it! But on Hallowe'en a threat to a neighborhood child forces Cam to reconsider.....

Plus many more exciting stories. The issue is also available for download to e-book or POD. See the site for details!
Posted by Donna Farley at 10:00 p.m. No comments:

Sneak peak at the cover of Dave Duncan's next book 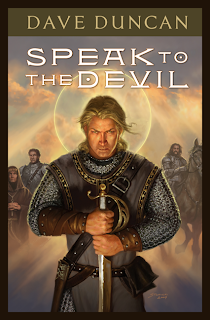 Here's the cover art for Dave Duncan's next novel, Speak to the Devil, coming out from Tor in hardcover in May.
Posted by Edward Willett at 1:19 p.m. No comments:

On Saturday, December 5, Claire Eamer is splitting her time between a book signing and a science fair. She's part of a Gala Yukon Author Book Signing at Mac's Fireweed, Whitehorse's independent bookseller, between 11 a.m. and 1 p.m. She's also displaying and signing books at the Yukon and Stikine Regional Science Fair at Yukon College.
Posted by Claire Eamer at 11:52 p.m. No comments:

Edward Willett will be teaching a course in writing speculative fiction for the University of Regina's Centre for Continuing Education Writing Series this spring.

The eight-hour course, which runs Tuesday evenings from March 6 to April 8, is described this way:

Students will receive an overview of the genres included in the umbrella term speculative fiction—science fiction, fantasy and horror—plus hands-on experience in the crafting of stories within these genres. Topics will include idea development, character development, world building and story structure. Information about speculative fiction markets, workshops, writers’ organizations, websites and conventions will also be provided. Students will be expected to produce work to be critiqued and to critique others’ work.

The tuition fee is $99; registration form is online here.
Posted by Edward Willett at 3:05 p.m. No comments: