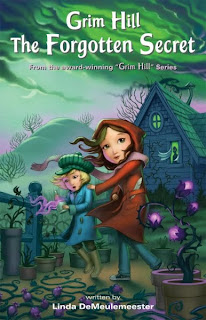 “The “Grim Hill” series gets another satisfying go-round with this fantasy/mystery romp featuring the spunky Cat Peters ... Another appealing mix of realism, whimsy, and legend.” – Booklist, May 2009

"The author interweaves mood, magic, and Celtic mythology with the typical preoccupations of adolescence, creating a worthwhile read for those who enjoy a suspenseful story built around engaging characters and an imaginative premise." – Resource Links, April 2009

“... once it takes off, it careens along, getting spookier and spookier … it does work out in the end, leaving Cat robbed of her potential best friend but on the verge of fitting in at school and wiser in the ways of relationships, both boy-girl and mother-daughter.” – CM: Canadian Review of Materials, April 2009

"DeMeulemeester offers a realistic heroine in the form of the conflicted Cat, and a storyline that fantasy addicts will devour." – Montreal Review of Books, April 2009

“The series is well-written, the Celtic fairy lore well-researched and well-incorporated … DeMeulemeester has created a fascinating world populated with believable characters and a strong dose of fantasy. What fun!” – HollyBookNotes (book review blog), April 2009

i am in love with the grim hill books they are my favourite books ever i read them over and over!!!