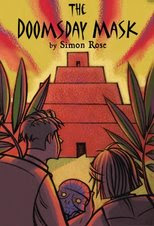 The legendary crystal ceremonial mask of Kulkaan, high priest of Atlantis,was believed to have been endowed with incredible powers. In the ancient civilization's destruction, the mask was thought to have been shattered and irretrievably lost, eventually being forgotten. Long considered to be a myth, the artifact’s fragments have now been found and the mask of Kulkaan reassembled. In a desperate race against time, Josh and Erica must prevent the mask from falling intact into the hands of the shadowy Crystalline Order to save the world from catastrophe.