Bernadette Dyer's novel Abductors, in limbo since earlier this year when its Canadian publisher folded, has now been picked up by an on-line publisher in Wales called The Guild Of Writers.
Posted by Edward Willett at 10:35 a.m. No comments:

Lorina Stephens reports from her book signing on Saturday, December 13, at the Chapters in Stone Road Mall, Guelph, Ontario: "In a word: fabulous! We almost sold out of copies of Shadow Song (historical fiction with some fantasy elements), and sold about a third of the stock of my new anthology of short, speculative fiction, And the Angels Sang. Best book signing ever!"

Lorina has also created her first podcast: it's online on her blog.
Posted by Edward Willett at 10:27 a.m. No comments:

Jerome says, "It's about immigration, aliens, choosing to live in Canada, and it's got lots of science fiction references along the way, mostly hidden in the music. I wanted to have a long goodbye to the States, so I drove 4,000 miles from Texas to the Yukon over four weeks, visiting friends, family, and seeing things--like Mt. Rushmore--that I'd never bothered to see before. And along the way I think I realized WHAT I was doing and why it mattered."

The series had a good run across Canada and was also heard internationally on Radio Canada International.
Posted by Edward Willett at 10:22 a.m. No comments:

Interview with Simon Rose at EZine@rticles

There's an online interview with Simon Rose, where he chats about his books, the writing process, ideas and inspiration and marketing and promotion, at EZine@rticles.
Posted by Edward Willett at 10:08 a.m. No comments:

The landscape of Cape Breton writing doesn't necessarily begin at the Canso Causeway and end at the Cabot Strait-at least not between the covers of this volume.

The fourteen stories in Undercurrents ply the literary oceans of time and space, possibility and imagination. And while you may find familiar themes in these pages-love, change, greed, spirituality-you will discover that they take on a new perspective when viewed through the lens of the speculative.

Likewise, some of the authors will be familiar to you, while others will be newly-discovered voices. What they all share is a connection to Cape Breton Island, and a willingness to look beyond the boundaries of the world we know-or think we know.

Inside are stories that ripple and swell with the unusual: fiddle-playing ghosts, malevolent cats, urbane vampires, and ordinary folks who have drifted into the realms of the extraordinary. Set your oars in these unusual waters and see for yourself what swirls in the undercurrents.

Three SF Canada members are among the nominees for the second annual Black Quill Awards awarded by Dark Scribe Magazine, "the virtual magazine dedicated to the books that keep readers up at night."

John R. Little is nominated in the category of Best Small Press Chill, for a novel or novella published by a small press, for Miranda (Bad Moon Books); other nominees are Into the Cruel Sea by Rich Ristow (Skullvines Press); Johnny Gruesome by Gregory Lamberson (Medallion Press); The Confessions of St. Zach by Gene O'Neill (Bad Moon Books); The Shallow End of the Pool by Adam-Troy Castro (Creeping Hemlock Press); and Veins by Lawrence C. Connolly (Fantasist Enterprises).

Michael Colangelo is nominated for "Dust and Bibles" (Chizine #35) in the category of Best Dark Scribble, for a single work, non-anthology short fiction appearing in a print or virtual magazine; other nominees in that category are "Afterlife” by Sarah Langan (Horror World), "Captain’s Lament” by Stephen Graham Jones (Clarkesworld #17); “Teeth” by Stephen Dedman (Clarkesworld #18); “The Blog at the End of the World” by Paul Tremblay (Chizine #38); and “Turtle” by Lee Thomas (Doorways Magazine #4).

There are seven categories in all. Nominations are made by both editors and active contributing writers. Readers are then invited to vote in each category, and two winners are announced in each category: Reader’s Choice and Editor’s Choice. Winners will receive "recognition in DSM, inclusion in press release materials announcing both nominations and winners, a virtual icon to be used on their own website, and a handsome award certificate."
Posted by Edward Willett at 10:54 p.m. No comments:

Stephen Kotowych has sold short story "Cladistics" to Eposic for its inaugural anthology, The Book of the Exodi, currently planned for a Spring 2009 release.
Posted by Edward Willett at 10:50 p.m. No comments: 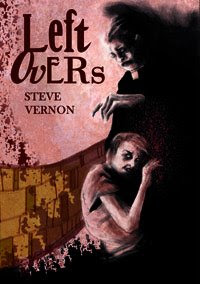 “Don’t let this collar fool you…”

What’s left of a man when everything worth losing has already been lost?

Is vengeance worth any price?