Karl Johanson has sold his short story "PIONeers" to Sci Phi: The Journal of Science Fiction and Philosophy.
Posted by Edward Willett at 11:36 a.m. No comments:

Simon Rose will be the guest blogger from June 30 to July 4 at the National Writing for Children Center, discussing time travel stories and the importance of historical research.
Posted by Edward Willett at 11:34 a.m. No comments:

The Toronto launch for Ursula Pflug's collection of stories, After The Fires (Tightrope Books) will be held on Thursday, July 10, from 7 to 10 p.m. at The Trane Studio, 964 Bathurst St.
Posted by Edward Willett at 11:29 a.m. No comments:

Colleen Anderson story to be reprinted in erotica anthology

Dave Duncan's books The Alchemist's Apprentice and The Alchemist's Code are now available for download from Audible.com.
Posted by Edward Willett at 11:26 a.m. No comments:

Linda DeMeulemeester, author of the Silver Birch Award-winning children's fantasy The Secret of Grim Hill, was featured in a brief article in the Vancouver Sun on June 21 (the print version included a photograph):

Burnaby's Linda DeMeulemeester has scored big with her first book, The Secret of Grim Hill. Ontario children in Grades 3 to 6 voted the spooky school story their favourite work of fiction, awarding it a Silver Birch Award. It's also a Canadian Toy Testing Council pick -- another honour driven by readers' choice. DeMeulemeester loves writing for kids of 10 or 11 because that was the age at which reading came alive for her.

As well, Linda's Grim Hill books now have their own website.
Posted by Edward Willett at 10:58 a.m. No comments:

Steve Vernon has sold a story "about God, the Devil and Harleys" to Doorways Magazine.

A review of his novel Gypsy Blood has been posted at FearZone.
Posted by Edward Willett at 10:43 a.m. No comments: 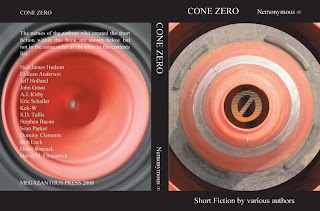 Here's the cover art for Nemonymous 8: Cone Zero, in which Colleen Anderson's story (which she's not allowed to name) will appear. The collection is due out in England in July.
Posted by Edward Willett at 10:36 a.m. No comments:

Simon Rose's sixth novel, The Doomsday Mask, due out next spring

Simon recently chatted about authors and their websites with Suzanne Lierance of the National Writing for Children Centre and fellow children's author Margot Finke on the Book Bites for Kids show on Blog Talk Radio.
Posted by Edward Willett at 10:32 a.m. No comments:

Matthew Hughes's story "Grolion of Almery" has been accepted for inclusion in Songs of the Dying Earth, an anthology in tribute of Jack Vance, edited by Gardner Dozois and George R.R. Martin.
Posted by Edward Willett at 10:21 a.m. No comments:

Tonight SF Canada presented the first SF Canada Lifetime Achievement Award to Phyllis Gotlieb at a reception at the Merri Collection of Science Fiction, Speculation and Fantasy in Toronto, in recognition of an outstanding and groundbreaking body of work in science fiction.

Ms. Gotlieb, 82, of Toronto, Ontario, is considered to be one of the founders of contemporary Canadian science fiction and has been a prominent voice in the field for over four decades.

Phyllis Gotlieb has had a prolific writing career in the genre, beginning with her 1964 novel, Sunburst. Canada’s top juried award for speculative writing, the Sunburst Award, was named for Gotlieb’s seminal novel. Her most recent release is Birthstones, published in 2007 by Robert J. Sawyer Books. Ms. Gotlieb is also a celebrated poet and received a Governor General’s Award nomination in 1970 for her collection Ordinary, Moving.

“Phyllis Gotlieb has been a mentor, an inspiration and a trailblazer in Canadian science fiction for decades,” said SF Canada president, Colleen Anderson. “The Lifetime Achievement Award is the highest honour our organization can bestow and Phyllis is a most deserving recipient.”

Below is the text of the remarks made by Joe Mahoney, Vice-President of SF Canada, at tonight's reception:

“Everyone here knows Phyllis Gotlieb. You know her work; perhaps you're fortunate enough to know her personally. You might know that she was born Phyllis Fay Bloom right here in Toronto, and that she was educated in Toronto as well. I don't have to tell you that she's written many fine novels, poems, short stories, and that her work spans many decades and genres -- that it is an outstanding body of work. You already know that.

“Did you know that she's written radio plays too? Of course you did.

“Phyllis is a founding member of SF Canada. Indeed, she is one of the founders of contemporary Canadian science fiction. She has been and continues to be a role model and mentor to many of us who consider her a part of our extended family. In her groundbreaking career Phyllis has been an editor, she's been nominated for a Governor General's Award, and she's even had an award named after one of her novels: The Sunburst Award. And the award we're presenting today isn't her first award – her novel A Judgment of Dragons, published by Berkley, won the Canadian Science Fiction Award in 1981.

“You are no doubt familiar with the sheer scope of Phyllis's work: with her elegant prose, the gritty reality of her fictional worlds, and the vibrant, sometimes tragic characters inhabiting those worlds. Such work has made her a towering figure in Canadian literature, a pioneer in Canadian science fiction. But her reputation transcends our borders – her work is respected the world over.

“It's one thing to be accomplished. It's quite another to be as accomplished as Phyllis is and remain so darned friendly. As a recipient of her generosity and warmth -- one of many recipients, I know – I am happy to attest not only to Phyllis's towering achievements as an artist, but also to her enduring humility.

“All of which is more than enough reason to present our very own Grande Dame of Science Fiction with this honour here tonight. Phyllis, on behalf of SF Canada, I am thrilled to present you with the first ever SF Canada Lifetime Achievement Award, along with my sincere congratulations.”
Posted by Edward Willett at 10:07 p.m. No comments:

The current (spring) issue of On Spec has stories by two SF Canada members in it: Tony Pi's "Aesop's Last Fable" leads off, while Steve Stanton's "Trickster" is the closer.
Posted by Edward Willett at 9:57 p.m. No comments: