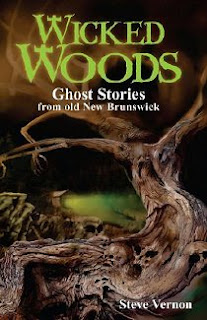 Steve will be appearing on CTV's Live At Five on May 5, then launching Wicked Woods on Wednesday, May 7, in Fredericton. (Call 454-1442 for location, time and details. )

Between May 7 to May 10 he'll be taking part in the Canterbury Tales Literary Festival in Saint John, New Brunswick. On May 8 he'll be reading from Wicked Woods at the Saint John Free Public Library Market Square. He'll also be there Thursday, March 7, to take part in the opening ceremonies along with the Lieutenant-Governor of New Brunswick, Honourable Herménégilde Chiasson, and the Mayor of Saint John, Norman McFarlane.

Throughout those few days he will be making several New Brunswick school appearances and will hopefully be making several so-far unnanounced media appearances. He also expects to sign at quite a few Nova Scotia bookstores, but those haven't been finalized yet.
Posted by Edward Willett at 4:58 p.m.