Edward Willett has been interviewed by the Regina Leader Post; the lengthy interview, which appeared on the front page of the Weekender section of the Saturday, February 26, issue, is online here.
Posted by Edward Willett at 8:53 a.m.

Matthew Hughes's "The Helper and His Hero," which appeared in the February and March 2007 issues of F&SF, has made the Nebula Awards final ballot in the Novella category.

The Nebula Awards are administered, voted and presented by the Science Fiction and Fantasy Writers of America (SFWA) to acknowledge excellence in science fiction writing. This year's awards will be presented at the Nebula Award Weekend in Austin, Texas, April 25 to 27.
Posted by Edward Willett at 8:47 a.m.

New SF Canada member Derek Kunsken has sold his short story "Beneath Sunlit Shallows" to Asimov's; it will appear in the June, 2008, issue, which hits the stands in April.
Posted by Edward Willett at 10:38 a.m. 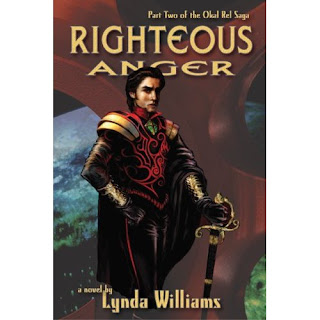 This award is named after Hal Clement, the pen name of the late Harry Stubbs, a well-known science fiction writer and science teacher. The award is for science fiction books suitable for Grades 6-12 that have a young adult protagonist. The science should be as correct as possible, but still a good story.

Dave Duncan has four novels appearing in the next three weeks

Dave Duncan will have four different novels appearing in new editions over the next three weeks:

Mary Choo recently sold two stories: “Killing Daniel,” to the Paranormal Fiction Issue of the anthology SNAFU, and “The Language of Crows” to Pseudopod, the horror podcast magazine.

The title of Edward Willett's new novel, Marseguro, refers to a water world far distant from Earth in space, but scant weeks away in travel time. Willett has assumed several technological advances in order for this novel to work: genesculpting, cloning, faster-than-light travel via brane space, and a Heinleinian "If this Goes On" of a religious dictatorship in the United States. But the pieces all come together nicely to tell a good story of the man who created a new race of amphibious humans, and the results of his efforts to protect them from the growing threat of religious zealots.

The book gets off to a slow start, but it picks up speed, and eventually finds itself steamrolling to an inevitable, but satisfying and enjoyable conclusion.
Posted by Edward Willett at 10:46 p.m.

The Memory Tree is up for Superior Achievement in a First Novel along with Heart-Shaped Box by Joe Hill (William Morrow), I Will Rise by Michael Calvillo (Lachesis Publishing), The Witch's Trinity by Erika Mailman (Crown) and The Hollower by Mary SanGiovanni (Leisure Books).

The winners will be announced at the World Horror Convention in Salt Lake City during the Stoker Awards Banquet on March 29. (Via Failing Better.)
Posted by Edward Willett at 1:30 p.m.

Rich Horton has finalized the table of contents for his annual best-of-the-year science fiction and fantasy anthologies, and Holly Phillips has a story in each of them.

Holly's "Brother of the Moon" will appear in the fantasy anthology and her "Three Days of Rain" will be in the science fiction anthology. (Via SF Signal.)
Posted by Edward Willett at 8:51 a.m.

Tor has bought Cory Doctorow's novel For the Win for release in 2010. It's the story of teenage computer gamers who get caught up in a global war fought entirely online. (Via SFF World.)
Posted by Edward Willett at 8:11 p.m.

Colleen Anderson's SF story “Ice Queen” has just been accepted into the Warrior Wise Woman anthology to be published by Norilana books.

Her previously accepted story “Strict Management” will now be appearing in the Open for Business anthology (Cleis Press).
Posted by Edward Willett at 8:07 p.m.

To mark the release of his new science fiction novel Marseguro by DAW Books on February 5, Edward Willett is giving away signed copies of the book, one a week for the month of February. To enter, send an email to edward(at)edwardwillett.com.

A five-day interview of Ed was conducted by Dr. Robert Runté in the Canadian Science Fiction and Fantasy group in conjunction with the release; the interview has also been posted to both Ed's blog and Robert's blog.

Ed was also interviewed by Jeff VanderMeer at his website, Ecstatic Days.

Ed will be reading at the Swift Current Public Library in Swift Current, Saskatchewan, on Friday, February 15, at 7:30 p.m.
Posted by Edward Willett at 10:35 a.m.

Karl Schroeder has launched a redesigned website, with a new URL for his blog.
Posted by Edward Willett at 10:33 a.m.

Cory Doctorow is a daddy!

Cory Doctorow became a father on February 3: as he puts it, "We're over the moon at the resounding success of our nanoengineering project! A tiny pinhead of instructions, faithfully recursively executed by tiny machines that stripped apart molecules and rebuilt them into this gurgling, nuzzling beautiful little bugalug."

An interview with Steve Vernon has been posted at FearZone, along with a review of his book Plague Monkey Spam.
Posted by Edward Willett at 10:23 a.m.

David's "Wylde's Kingdom," Derryl's "Ancients of the Earth" and Elaine's "The Story of the Woman and her Dog" will all be part of the anthology, which this year features longer stories, between 10,000 and 20,000 words. It's scheduled to be published in time for the World Fantasy Convention in Calgary at the end of October.
Posted by Edward Willett at 10:11 a.m.

Tobias Buckell has reviewed Nathalie Mallet's novel The Princes of the Golden Cage for Orson Scott Card's Intergalactic Medicine Show, saying, “It is refreshing to see a medieval fantasy novel of sorts that isn't grounded in the usual setting tropes. Mallet wafts a cool breeze reminiscent of 1001 Arabian Nights through the novel with her unique setting.”
Posted by Edward Willett at 9:46 a.m.