Stephen Kotowych will be interviewed on Monday, November 5, on Kitchener, Ontario's, Rogers TV Cable 20 morning show Daytime about his Grand Prize win and story in this year's Writers of the Future.
Posted by Edward Willett at 3:16 p.m.

Ahmed A. Khan essay on The Lord of the Rings to appear in New Myths

Ahmed A. Khan's critical essay on The Lord of the Rings (the book, not the movie), entitled "The Magic of the Rings is Temperamental," has been accepted for publication in the first issue of New Myths, out on December 1.
Posted by Edward Willett at 1:06 p.m.

Labels: Ahmed A. Khan, essays, New Myths, nonfiction, The Lord of the Rings

Stephen Kotowych, Tony Pi reading and signing for Writers of the Future XXIII

In celebration of the release of Writers of the Future XXIII, Stephen Kotowych and Tony Pi will be doing a reading and signing at the World's Biggest Bookstore, 20 Edward St., Toronto on Tuesday, November 6, from 6 to 9 p.m. Robert J. Sawyer, a judge in the contest, will also be appearing.
Posted by Edward Willett at 8:58 a.m.

Tony Pi, Mark A. Rayner stories in Abyss and Apex

Tony Pi's novelette "Metamorphoses in Amber" is now out in Abyss and Apex Q4 2007 (which also features Mark A. Rayner's "Under the Blue Curve").
Posted by Edward Willett at 8:52 a.m.

Complete results can be found here.

Next year's Canvention will be hosted by KeyCon 25 in Winnipeg, a four-day convention over the Victoria Day weekend.
Posted by Edward Willett at 9:07 p.m. 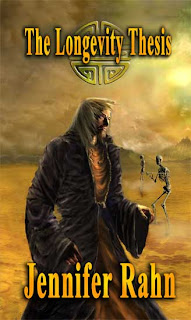 Here's a synopsis of the book:
Antronos knew nothing but the Desert. Full of sandstorms, hallucinogenic dust dreams and the strange undead, he would have gone insane if not for the magic of his mother that held the demons at bay. One day, his mother died.
The underground civilization of the Temlochti State did not readily accept Antronos the surface creature from the Desert. Enduring constant derision, Antronos sometimes managed to find work along the docks of the underground river that made life rich and easy for the tunnel dwellers. After saving a university professor from drowning, he was granted a studentship in medicine.
Thinking that understanding life and death might help him one day at least accept, if not understand, the strange way in which his mother had died, he decided to pursue a graduate degree after he became a medical doctor. His research topic: longevity.
Unfortunately, his graduate supervisor's methodology is less than ethical, and he hates Antronos with a passion. Antronos is tricked into committing an act of murder. He is then blackmailed into doing Sen Vernus' dirty work as the old man grabs power: political power, psychic power, magical power, with the aim of taking over the minds and bodies of the most powerful and rich people in the state.
He may die, but Antronos has decided to rebel.
Posted by Edward Willett at 4:45 p.m.

Linda DeMeulemeester YA fantasy up for Silver Birch Award

The Silver Birch Award is awarded in fiction, non-fiction and Express categories each May, based on ballots cast by Grade 3, 4, 5 and 6 students earlier in the same month. It's administered by the Ontario Library Association and run by teacher-librarians and teachers in schools and by children's librarians in public libraries.

Leslie Carmichael's young adult fantasy Lyranel's Song and Nicole Luiken's Frost are among the nominees for the 2008 Golden Eagle Book Award. Other nominees are Adventures in Istanbul by Cora Taylor, Kicker by Michele Martin Bossley, Mickie McGill & the Ring of the Red Dragon by Morag Haysom, No Time Like the Past by David A Poulsen, Skinnybones and the Wrinkle Queen by Glen Huser, Tiger Threat by Sigmund Brouwer, The Uncle Dunkle Chronicles - Escape From Treasure Island by Darren Krill, and Wild Ride by Jacqueline Guest.

The Golden Eagle Book Award is a literary award that is given annually to an Alberta writer whose book is selected by children in Grades 4 through 8 from schools in the southern Alberta communities of Claresholm, Nanton, Stavely, Granum, Fort Macleod, Pincher Creek and Lundbreck. The winning book will be announced in the spring.
Posted by Edward Willett at 4:19 p.m.

Ahmed A. Khan has agreed to co-edit an anthology of SF stories that feature Islam or at least one Muslim character in a positive light, at the request of Mohammad Aurangzeb Ahmad, who created and maintains the Muslims Writing Science Fiction site. Ahmed has issued a call for submissions as follows:

Send submissions as .doc or .rtf attachments to ai_59@yahoo.com.

Payment: 1 cent per word, with a minimum of $10 and maximum of $40 + a contributor's copy. The payment will be upon publication.
Posted by Edward Willett at 4:12 p.m.

Matthew Hughes has been awarded this year's Gulliver Travel Research Grant by the Speculative Literature Foundation. The Gulliver Travel Research Grant is awarded to assist writers of speculative literature, including fiction, drama, poetry, and creative nonfiction, in their research. The $600 U.S. grant is to be used to cover airfare, lodging, and/or other travel expenses.
Posted by Edward Willett at 4:09 p.m.

Mark A. Rayner sells story to Abyss and Apex

Mark A. Rayner has sold his short SF story “Under the Blue Curve” to Abyss and Apex. It will appear in their fourth quarter issue.
Posted by Edward Willett at 5:19 p.m.

Simon Rose's new YA fantasy The Heretic's Tomb is now out from Tradewind Books:

While exploring a medieval archaeological site containing the ruins of an ancient English abbey, Annie discovers the long-forgotten tomb of Lady Isabella Devereaux, who had been condemned to death as a heretic in 1349. When Annie curiously examines a mysterious amulet she finds in the tomb, she is suddenly sent hurtling back to the Middle Ages, encountering sorcery, treachery, treason and the ghastly horrors of the Black Death.
Posted by Edward Willett at 4:08 p.m.

Arthur Slade's Villainology: Fabulous Lives of the Big, the Bad, and the Wicked (Tundra Books) is now officially in stores. It even has a video trailer (see below).
Posted by Edward Willett at 4:00 p.m.

Brett Alexander Savory's story "Messages" is included in The Year's Best Fantasy and Horror 2007, edited by by Kelly Link, Gavin Grant and Ellen Datlow.
Posted by Edward Willett at 10:27 a.m.

Douglas Smith has turned in the manuscript for a chapbook of his work to be published by PS Publishing as part of it PS Showcases series,"short, chapbook-style collections by notable emerging writers of short SF, fantasy, and horror." Each chapbook will be 20-30,000 words in length, in an edition of 100-200 signed hardcovers and 300 trade paperbacks. The chapbook will include the short story Doug's novel-in-progress is based on, plus two new novelettes, and is scheduled to come out in March, 2008.
Posted by Edward Willett at 10:17 a.m.

A winner (gold medalist) and runner-up (silver medalist) will be announced in each category during the week of October 15-19, and remaining semifinalists will become bronze medallists.

A formal awards presentation will be held on Saturday, November 3, in conjunction with the 2007 Children's Humanities Festival in Chicago.

Posted by Edward Willett at 9:11 a.m. No comments: