Tony Pi, Stephen Kotowych among winners in this year's Writers of the Future contest

Tony Pi and Stephen Kotowych are amongst 12 winning writers and 12 illustrators from around the world who will be honored during the 23rd Annual L. Ron Hubbard Achievement Awards at the Athenaeum Club on the grounds of California Institute of Technology on Friday, August 24.

At the ceremony, two Grand Prize winners will be announced, each of whom will receive $5,000. Quarterly winners also receive cash prizes from $1,000 to $500. The winning stories and illustrations will appear in the annual anthology L. Ron Hubbard Presents Writers and Illustrators of the Future, volume 23 (Galaxy Press).

An excellent review of M.D. Benoit's novel Synergy (Zumaya) is now online at MyShelf. A highlight:

Benoit builds characters that are multidimensional and with whom readers can establish a bond, even when those characters aren't behaving as nobly as we would like. Her science is sound, which is critical for this genre, and the ethical questions she raises are already being debated in medical research circles. But, it is Benoit's ability to put all of this into plot twisting, fast paced thriller that has her right up there with the big boys like Gregg Hurwitz and Michael Crichton.
Posted by Edward Willett at 10:08 a.m.

Matthew Hughes has received a good review in Publisher's Weekly for his latest novel, The Spiral Labyrinth (Night Shade Books). The review begins:

The superior melding of fantasy, humor and detection seen in Majestrum(2006) is displayed to even better advantage in Hughes's second chronicle of Henghis Hapthorn, a "discriminator" (or consulting detective) on an alternate Earth.
Posted by Edward Willett at 8:00 a.m. 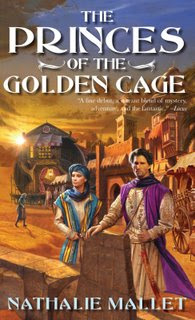 Nathalie Mallet's book The Princes of the Golden Age has a new cover, and has received its first review (in Locus Magazine). Nathalie has posted the review at her brand-new blog.
Posted by Edward Willett at 7:54 a.m.

Edward Willett has begun recording his weekly newspaper science columns in audio format as a podcast. You can access it here, where you'll also find a link to subscribe via iTunes.
Posted by Edward Willett at 7:50 a.m.

Yes, the original Star Trek theme has lyrics. Yes, the song is too high for him. But you can subject yourself to Edward Willett's rendition of it (intended for use at this year's ConVersion SF convention in Calgary) here.
Posted by Edward Willett at 10:32 a.m.

Hayden Trenholm has a story, "Iron Ties," coming out this month in Talebones #35 and another, "Like Water in the Desert," in the next issue of Challenging Destiny.
Posted by Edward Willett at 8:59 a.m.