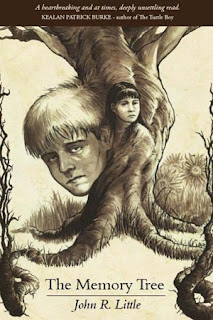 A subsequent signing will be held at Chapters North London, Maisonville Mall, London, Ontario, on Thursday, June 7, from 6 to 9 p.m.

John describes The Memory Tree is "a time-travel novel in the style of Jack Finney." It has already been positively reviewed in Booklist, Hellnotes, Horror Fiction Review, Apex Science Fiction and Horror Digest, and other places. Upcoming reviews will be printed in issues of Cemetery Dance and Dark Discoveries.

Gary A. Braunbeck (three-time Bram Stoker award winner) wrote, "A time-travel novel without gadgets or gimmicks; instead there is wonder, and grace, and fear, and humanity so deep one nearly drowns in its tides. Writers work their entire lives in the hopes of one day producing something this astonishing. The Memory Tree is a priviledge to experience. I don't think a finer first novel will appear this year."

Here's the copy from the back cover:

Sam Ellis is a middle-aged stock broker in Seattle, successful, married to a woman he loves dearly, with everything he could want. But below the surface, there are scars. Then his world changes. For reasons he doesn't understand, Sam is thrust back in time to 1968, the summer he turned thirteen. He meets his parents and his own childhood self. That summer changed Sam's world. Monsters walked the streets of his hometown, and now Sam will come face to face with those monsters again, this time as an adult. Nothing will ever be the same.
Posted by Edward Willett at 5:27 p.m.